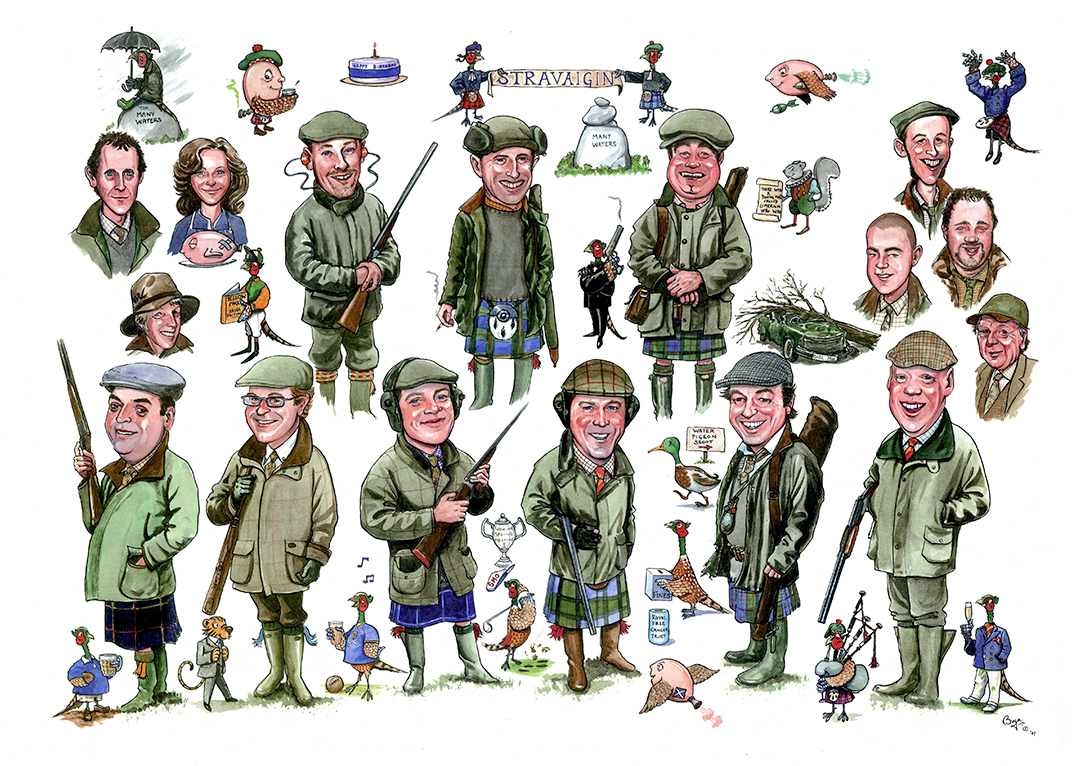 I was in Belfast in 1977 as a nineteen year old Subaltern when a famous cartoonist called Mac who had been in the Royal Flying Corps (shows his age) came out to paint our Mess. I remember thinking ‘ I could do that’ and years later I left the Army and found myself doing just that. I used to visit Regiments all over the world, including Brunei, Cyprus, Germany and especially Northern Ireland to commemorate their tours. Its a very typical Army thing although I did paint one or two Ship’s Wardrooms in my time.

Latterly I stopped doing Officer’s Messes and concentrated on other groups, especially shooting ones. I found that as they tend to be smaller numbers I can deliver more detail and, of course, it means that I visit a shoot rather than somewhere I might get shot.

How do I do a group caricature?

I have to visit the day, or even attend the night before as well, to get a feel of the characters. Then I wander around with a camera taking shot of the guns and their beautifully behaved WAGS and dogs. I try not to get in the way and I’ve even been known to help stuff if the action heats up. Then, once the guns go home, I go back to the studio and spend months crafting the painting to include as many little touches as possible, all gleaned from the witty banter and idle gossip. Beware, If your dog runs in, you shoot a low bird or your wife misbehaves, it will be noticed and recorded for posterity.

Finally, several months later, the final picture will be ready, measuring about 3’ x2’ and if you want it framed, that’s all part of the deal. Equally I can arrange to have signed and numbered A3 prints produced for each of the ‘victims’.

So, it’s as simple as that. You have all the fun, I do all the work and you make me happy by paying me for the pleasure of me cartooning you and your friends… If you’d like a group caricature please email me and we can start talking about your thoughts. 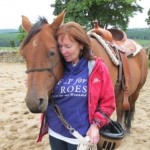 “Bryn created the perfect painting for my husband and his two best men, it was everything I had hoped for and more. Bryn was under pressure as I only enquired two months prior to our wedding, however his drive, energy and enthusiasm for the piece made sure it was delivered a week before the wedding and without even meeting the three of them he managed to completely encapsulate their personalities. It is a painting that we will treasure forever and a continual conversation starter in the house. Thank you Bryn xx” 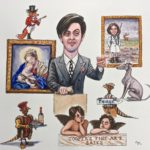 “You have captured the very essence of Guy! Right down to that ‘supercilious’ eyebrow… We are absolutely thrilled with the caricature – thank you for managing to marry Guy’s rather niche tastes into one cohesive picture. We cannot wait to find a suitably ritzy Baroque frame within which to hang it.

Coming to meet you and Emma was an absolute pleasure and I would recommend Stable Cottage B&B to all. The breakfast was wonderful and Emma should sell her granola. I wish you all the best in your new direction as a sculptor and every success at the upcoming exhibition.” 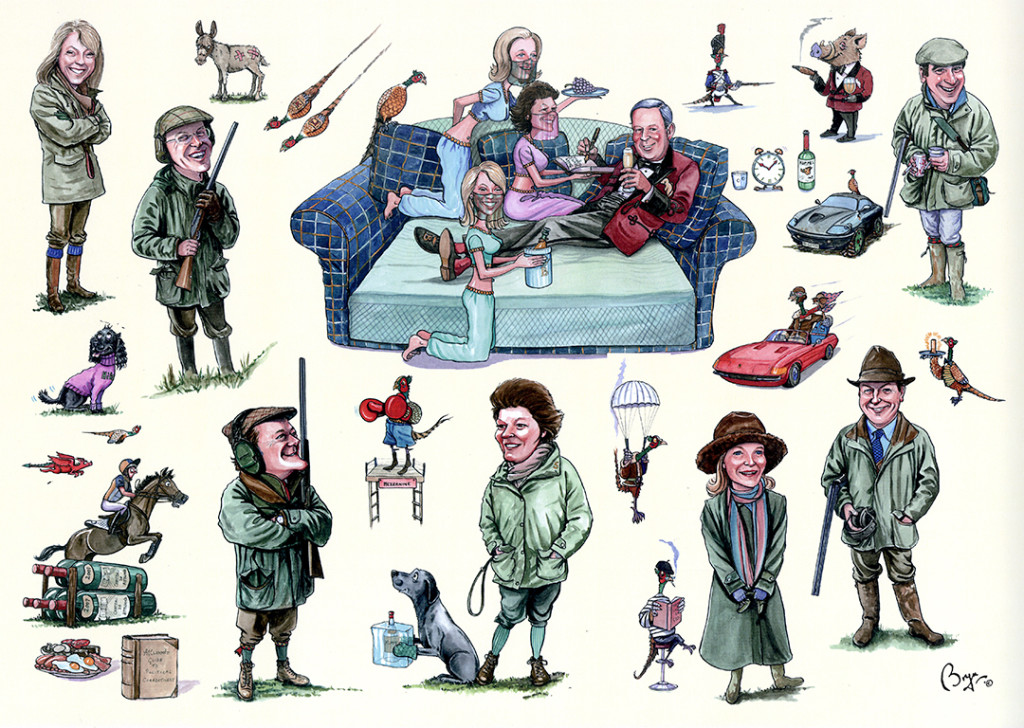 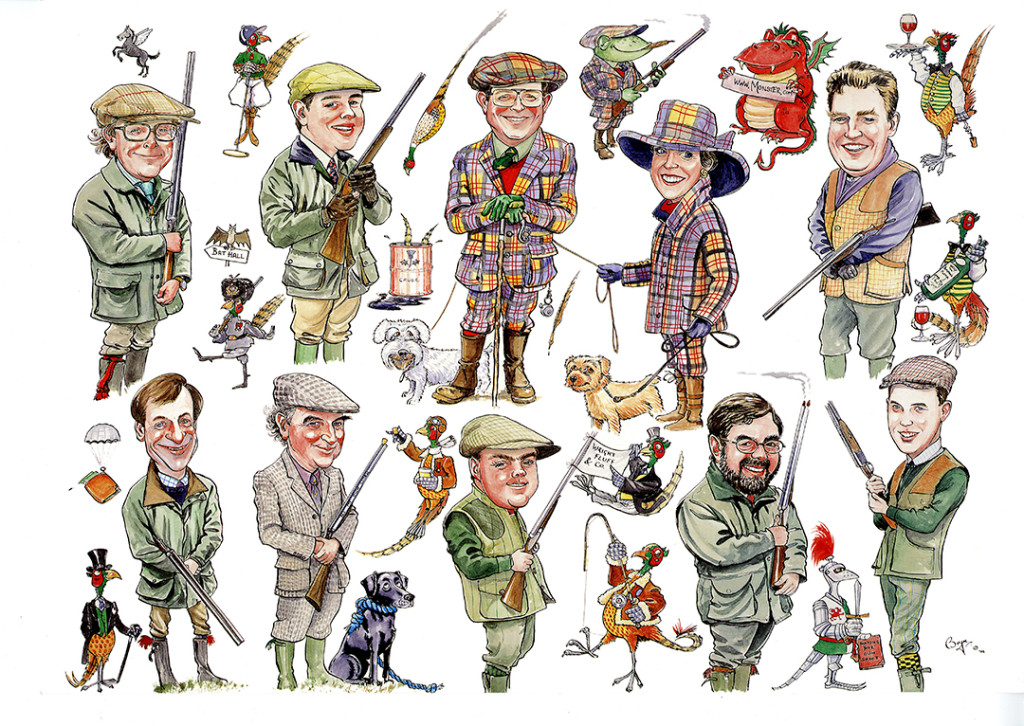 If you are interested in a ordering a group commission, please complete the form below. 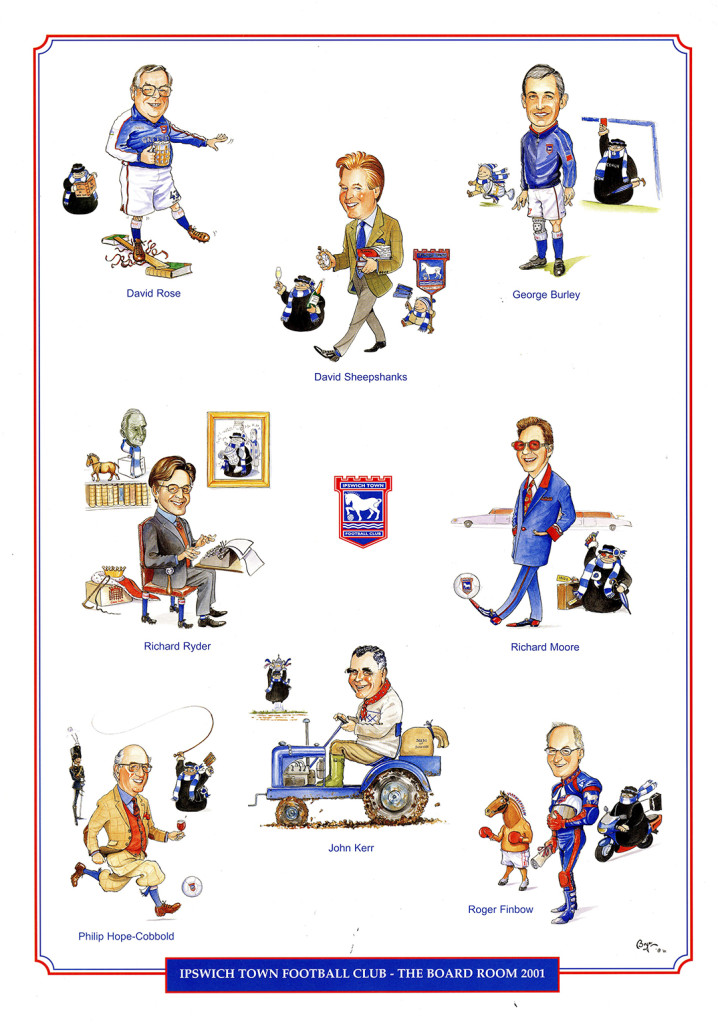