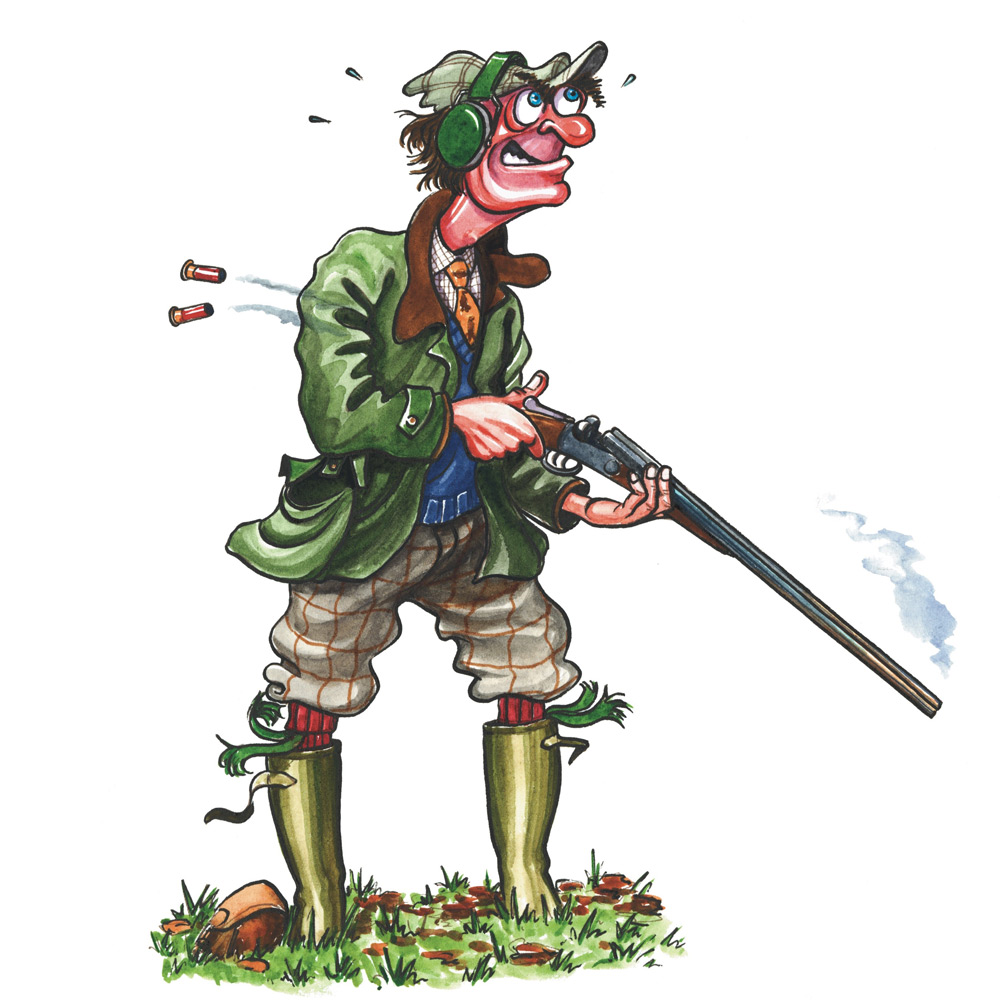 My friend Tom invited me for a day at a shoot where he has a half gun. He is always somewhat understated and I should have remembered that as I heard him use phrases like ‘small shoot… we meet in a pub…no formal keeper… don’t expect much…fun bunch of people…lunch is a slice of game pie…bring your dog…all very relaxed’

I should have known but I didn’t. I took him at his word and packed a single bag of cartridges and looked forward to a farm shoot with a bag of around 50 to 80 birds and a pint or two in the pub. My inherited and untrained cocker, Pepper, would have a chance to pick up a couple of birds and be forgiven for any sins; perfect.

Well, it was a pub for breakfast, but not the sort of pub I’d expected. It was a Farrow and Ball type of gastropub, the kind that has a menu for breakfast… and a vegetarian option, for goodness sake. I had the full English out of principle, no hummous nestling on a bed of hand crafted haloumi with a delectation of watercress salad for me.

As we booted up at our cars I saw the other guns staggering to the Gunbus (another surprise) with large, clearly very heavy bags that looked like they might contain enough ammo to hold Rorke’s Drift for a week. I slung my single cartridge bag of 70 under the seat and concentrated on keeping Pepper from tangling herself into knots with her unfamiliar lead. This was all looking distinctly professional.

I was peg 6, well, I had thought I was 9 but when I got there I realised I had read the peg draw upside down. I was told to find my own peg; this one was occupied. I finally found the correct peg. Tom stood behind with the dog and I un-sleeved the new 20 bore and loaded up, looking anxiously at a very large wood and beautifully laid out cover crop on the slope well above me.

It was freezing cold so I was wearing gloves and had a natty silk scarf around my neck. I fiddled around and tucked my whistle cord into my coat and settled down as I watched pheasants flop out of the cover into the wood, encouraged by lines of well orchestrated flag men. Hmmmm this looks rather serious I thought..

A single bird flew out of the end of the wood, lifted on the breeze and swung over me. I mounted the new gun, a joyous movement, almost ballet like, and missed, both barrels. The dog started to whine and jump around.

The single bird was just the advance guard and his mates now started to break out, curving across me. I dug into my pocket for two more cartridges but brought my hand out with cartridges sticking to it like some bizarre hedgehog. My posh Sealskinz gloves have magnets to hold back the fingers but instead they were collecting my squibs. My slithery scarf came loose and blew over my face, tied up with the whistle cord.

More birds flew over me, like a scene from the Battle of Britain, squadrons of them. I fired some Ack Ack up into the sky and they flew on. The dog began to howl, then leap, then squirm, then yelp.

‘Shut up Pepper’ I hissed as she twisted around Tom’s legs and more squadrons streamed over my head in unbroken columns. To left right and to my rear they fell, but not to my gun. ‘ Shut up you bloody dog!’

My thumb pushed the safety catch and it stuck fast until I realised that it was already off. I put it back on then slid it forward and caught my thumb on the lever. I managed to pull off my magnetic gloves, stuff them and my scarf into my pocket and keep firing up into the formations above.

At last I connected, not the graceful head up of a bird well hit, but the tail up of a bird peppered in the rear end. The dog howled her support and jumped around the twisted lead, wearing a beaten path around Tom’s feet. My fingers slipped off the fore-end, touched the barrels and singed.

The drive ended finally and I released Pepper who raced off to pick up everyone else’s birds while Tom bent to the task of collecting my huge pile of empty cartridges. I tried to find my whistle and work out if I had enough cartridges for another drive, let alone the day. It did not look likely.

The day went on and so did the howling and the disapproving glances and polite mutterings. I would have liked to report that I improved but that would not be entirely true. When I did shoot straight it was too low and when I should have been selective, I was greedy.

So, the moral of this sorry tale? Proper preparation and planning prevents a pretty poor performance. Not in this case; it was indeed a pretty poor performance all round. Not enough cartridges, an unfamiliar gun, magnetic gloves, slithery scarf, lack of concentration at the briefing and unsporting shooting with a dog who was vociferous. I can only hope that one day they will forgive me and that next time I will do my research and be properly prepared.

In the meantime, I can only hope there is a next time.

Mind you that’s not a bad idea for a cartoon… perhaps I’ll keep her as my inspiration.