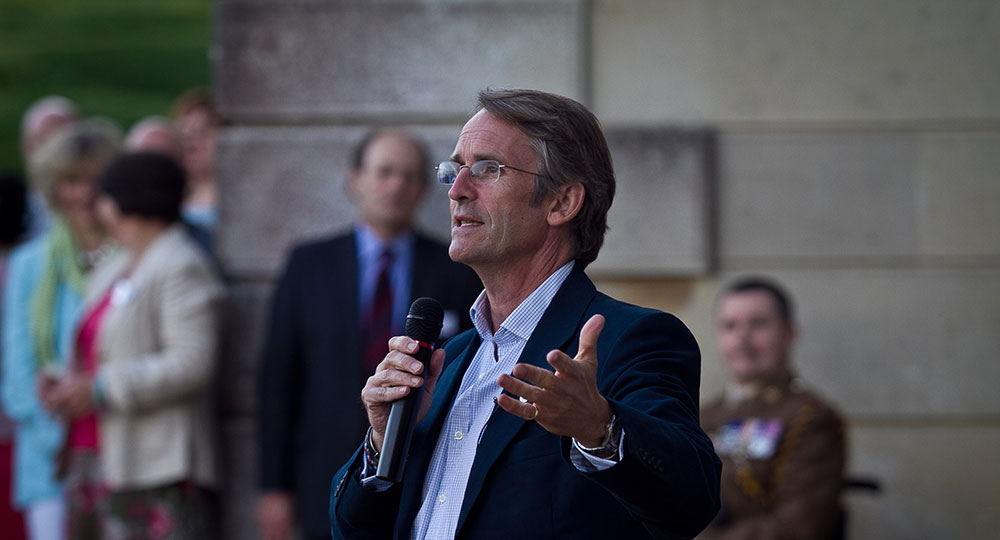 Losing his father at four years old, Bryn and his family lived in a caravan while his mother drove a tractor to make ends meet. He was given a free education at Wellington College before ‘scraping’ into the army. Serving in the Royal Green Jackets for ten years, he undertook four operational tours and was a jungle warfare instructor in Australia when he decided to become a cartoonist. Emma and Bryn began Bryn Parry Studios in a damp cellar and over twenty-two years built it into a successful business based on his cartoons.

In 2007 they visited Selly Oak hospital, met some wounded soldiers and decided to ‘do something to help’. Help for Heroes was launched in October 2007 and in the nine years Bryn was Chief Executive, H4H raised over £300m and helped thousands of injured Servicemen and women. It was not easy but Bryn was determined to achieve his goal.

Bryn says “In my life, I have learned to lead by example, to communicate clearly and passionately, to identify the aim and to stick to it regardless of the many obstacles put in the way. I have been knocked down but I have always got up again.

I feel the skills I have gained, the mistakes I have made, the lessons I have learnt in my previous lives have given me a very different approach to starting and running a charity, which after all, is a business, albeit with the beneficiaries’ care as the outcome.

I set out with a simple intent, to do my bit to help some blokes and along the road found that I had created an organisation and in doing so, changed how we as a nation support our Armed Forces.

A life without challenges would be dull. As Churchill is quoted as saying ‘Success is not final, failure is not fatal: it is the courage to continue that counts.’ I feel privileged to have been given this opportunity to help the blokes and I hope my story might inspire others to identify what really matters in life.”

Bryn’s story is unique, but his experiences are relevant to us all as we seek to do the best in life. He is invited to speak to companies, at schools and universities, and to people of all ages and backgrounds interested to hear the human side of his extraordinary story. He talks in a self-deprecating, approachable manner, laced with insights, anecdotes and with a wry sense of humour.

For speaking engagements, Bryn Parry can be contacted via his agents at Chartwell Speakers

What people say about Bryn Parry as a speaker

Bryn is a case study in how passion and relentless enthusiasm, twinned with an insistence on the best military-levels of organisation can enthuse a team and make it succeed against the odds.

I wouldn’t hesitate to recommend Bryn as a speaker. His achievements and experiences through Help for Heroes were driven by his passion and commitment. Bryn spoke at a number of events we held in Dubai and his passion and commitment always came through in spades, combined with humour, great knowledge and insight. It is rare that someone can capture the attention of 700 people, particularly when they are stood outside with a glass in their hand…Bryn never failed.

I have known Bryn since way before he and Emma founded Help For Heroes in 2007, so I know the full magnitude of this incredible story. As you would expect of a former army officer who then became a successful cartoonist, he is a confident orator with both a quick wit and a sharp eye. But now he has been at the helm of this runaway success charity for the best part of a decade, he has a wealth of experience in dealing with all kinds of fascinating situations. In dealing with the government, the media and the military he has sailed through a lot of troubled water, and he has the fascinating tale to tell. Your audience will be hanging on his every word.

Will Hetherington
Editor of Shooting Gazette

Bryn is a remarkable man who has achieved so much and helped so many. I think he’s a true inspiration and a real motivator. He’s someone you would always want on your side.

Bryn Parry is a very accomplished public speaker who manages to be inspirational without sounding remotely contrived, informative without sounding boring, and funny without sounding disrespectful. These are difficult tricks to pull off, and they elude most speakers. I have listened to him on many occasions, and know that he can move the mood of a room, and leave the audience feeling all the better for what he has had to say.

Bryn Parry is one of the most interesting, resourceful, accomplished and engaging individuals I have met.
It is very rare to come across someone who has the ability to nurture so many talents, to such a high level, in one short life. Time spent with him or listening to him speak is always entertaining, uplifting and inspiring.

Bryn draws upon a remarkable, if unconventional, career story to deliver thought-provoking insights to leadership and to meeting seemingly insurmountable challenges. He delivers a serious message but with a self-deprecating twist of humour never far away!